SeaDrix™ combines SEA’s low-profile acoustic sensor, KraitArray, with iXblue’s unmanned surface vessel, DriX, to create a system that can operate in open ocean conditions and for up to ten days un-refuelled or much longer with at-sea refuelling system. 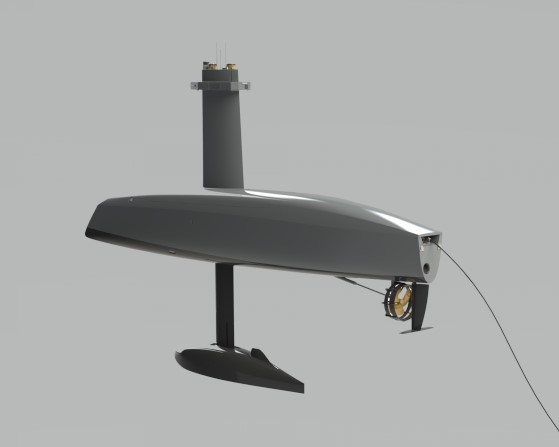 KraitArray is a thin 20mm modular array that detects acoustic signatures from submarine contacts. Optimised for use with autonomous systems, the KraitArray consists of up to 150m sections that can be tailored to meet the objectives of a specific mission. When attached to DriX – an unmanned surface vessel with a wave piercing hull that acts as a stable towing platform thanks to its outstanding seakeeping capabilities – the technologies offer a persistent autonomous anti-submarine surveillance system. Both technologies are proven in operation. Steve Hill, Managing Director of SEA said:

“We’re delighted to have partnered with iXblue to develop our latest sophisticated autonomous anti-submarine surveillance capability, SeaDrix™. The integration of the two technologies results in a system that will allow naval forces to complete surveillance missions without the need to rely on military vessels and support teams being in the immediate area. The system was initially developed for the Ministry of Defence for deployment in October 2019 and we look forward to discussing the solution at DSEI this month.”

As well as its long endurance capabilities and rugged design, SeaDrix™ has a range of other powerful attributes. It is modular, coming with standalone mission planning, collision avoidance, sonar processing and situation awareness systems, along with comprehensive communication (including long range HF LPI) and the ability to operate with other SeaDrix™ or manned/unmanned systems.

It is also highly deployable. SeaDrix™ is 7.7m long x 3m high, meaning that it can be transported globally in an ISO container. It has its own deployment system (DDS) that can launch, recover and refuel SeaDrix™ at sea from a single point crane or davit either onboard or on a jetty. SeaDrix™ can self-deploy at up to 14 kts and multiple SeaDrix™ systems can be shipped globally to form a multi-static system as and where required.

“By providing customers the ability to ‘build their own system’, we are offering improved flexibility, an entry into ASW alongside the potential to grow the capability, and ease of use for navies, which are now tackling increasingly diverse threats in a range of scenarios.”
Guillaume Eudeline, Business Development Manager at iXblue, said: “This is an exciting development. Bringing safety and efficiency to the warfighter, the unique combination of SEA’s KraitArray and our autonomous surface vessel DriX brings a new, durable anti-submarine surveillance capability to naval forces around the world.”

READ MORE
SEA delivers and supports technology-based products for the defence and transport markets alongside specialist research and training services.