Cohort company EID has finalised and signed a 7.5 million Euro contract with the Portuguese Ministry of Defence (Portuguese MoD) to provide software-defined digital multiband, multirole, and multimode tactical PRC-525 radio systems for the Portuguese Army. Deliveries will take place between 2017 and 2023

The PRC-525, which is widely recognised for its HF/VHF/UHF multiband and full IP capabilities, is already in service in Portuguese Army and Navy. The initial contract, amounting to around 40 million Euros, was completed in 2015 and the new contract confirms the excellent performance and reliability of the EID radios, which have been extensively used in operational scenarios, exercises and peace keeping missions.

The new supply of radios will be integrated in the shelters of Army’s Tactical Communication and Information System (SIC-T), a programme that is part of the Military Programming Law approved in May 15 and will be launched shortly.

“This new contract demonstrates the trust the Portuguese Ministry of Defence has in EID’s knowledge, products and solutions. We are very honoured to be able to supply our Army once again with the necessary tools to do their very best on the field.” 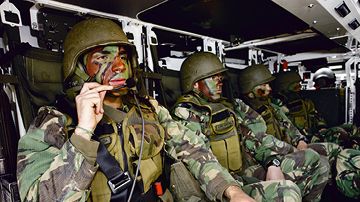